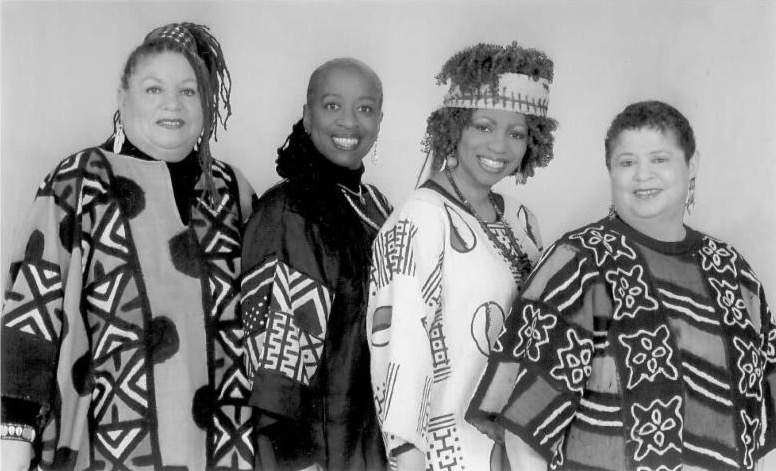 IN PROCESS…, an African American women’s a cappella ensemble, originated in the DC Metropolitan Area from a Sweet Honey workshop. For over 30 years the rhythmic, harmonic, consciousness-raising music messages of In Process… have been heard locally and in venues from Arizona to West Virginia. Her blended repertoire includes spirituals, gospel, jazz, blues, and historic and original contemporary songs of love, freedom, peace and justice. In Process… has two CDs, IN PROCESS… and MISSION: LOVE and her original music is featured in the Anacostia Watershed Society’s documentary “The Anacostia: Restoring the People’s River.” More than 50 women have passed through In Process…, which today features Nketia Agyeman, Pam Rogers, Paula Pree, and Tiya! 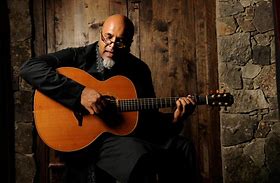 TOM PRASADA-RAO, a musician’s musician, an unassuming presence on the folk scene since the early ’90s, sharing his musicianship and his extraordinary songs. From Rishi’s Garden with its homage to Ravi Shankar to the groove of Sleeping Beauty, Tom’s music is melodic, ambitious, and reverent.

In the fall of 2007 Tom quit the road to produce records, raise two stepdaughters, and walk a rather large Golden Doodle named Thurman twice a day. In addition to producing, he took a job teaching music at White Rock Montessori in Dallas. He was formerly the songwriting teacher at the University of Virginia’s Young Writer’s Workshops, where he created the songwriting curriculum. He has been featured on the nationally syndicated TV show Troubadour Texas.

“The most moving, pointed and memorable songs reflect Prasada-Rao’s indebtedness to Bruce Cockburn, Bob Dylan, and Richard Thompson, and other singer songwriters who have something to say, and a distinctive way of saying it.”
–Mike Joyce, The Washington Post

From headlining major festivals, to the relative obscurity of a recording studio, Tom continues to mature as an artist. That work blossomed into an impressive resume of producing credits as well as cuts (his songs covered by other artists). Tom’s 2014 release “ADAGIO”  features bass guitar legend Chuck Rainey and piano virtuoso Julie Bonk, all masterfully produced by Jagoda. He has performed with Janis Ian, Peter Yarrow, Michael Hedges, Ani Difranco, Odetta, and many others.

Victoria Vox is a ukulele-playing, award winning songwriter with an infectious pop-folk-jazz style. Vox also has received praise for her ‘invisible’ instrument: The Mouth Trumpet, blowing her own horn on the Jay Leno Show.  She has been artist in residence at Strathmore hall and tours in Europe, New Zealand, Australia, Canada and across the U.S.

Vox straddles the folk scene as well, where she has opened for Jackson Browne, Tom Chapin, Leo Kottke, and Cheryl Wheeler. She performs mostly as a one-woman band, incorporating a loop pedal and bass effect on her ukulele, while taking her own solos on mouth-trumpet, and cutting through it all with her genuine lyrics and pure voice.

Vox’s soulful-ukulele shatters all preconceived (and ill-informed) notions about ukuleles and their underrated capabilities as an instrument. – WhatWeekly

A southeastern North Carolina native who now calls Herndon, Virginia, home, CRYS MATTHEWS blends Americana, folk, jazz, blues, bluegrass and funk into a bold, complex performance steeped in traditional melodies and punctuated by honest, original lyrics. Having been compared to everyone from Toshi Reagon to Tracy Chapman to Ruthie Foster, Matthews’ eclectic infusion of genres has won her honorable mentions at the 2017, 2013 and 2014 Mid-Atlantic Song Contest and extensive radio play from Woman of Substance radio to WTJU-Charlottesville and WMRA-Harrisonburg to KBOO-Portland.

Equally at home in an acoustic listening room and on stage at large music festivals, Matthews has gathered a loyal following on the east coast playing such prestigious venues as the Sundance Film Festival, the Birchmere, the Hamilton, and Jammin’ Java. Matthews’ festival and showcase roster has included BMI’s Island Hopper Songwriter Festival, the 40th Michigan Womyn’s Music Festival, Folk Alliance International, 30A Songwriters Festival, Northeast Regional Folk Alliance and many more.

Crys Matthews is a songwriter with a powerful message and voice to match.

Matthews is a prolific lyricist and composer who finds inspiration in her surroundings, from driving through the Blue Ridge Mountains to the compelling and heartbreaking love story of Richard and Mildred Loving. Thoughtful, realistic and emotional, Matthews’ songs speak to the voice of a generation and remind us why music indeed soothes the soul.

GREG GREENWAY has been described as “one of the strongest and finest voices in folk music,” and his singer/songwriter tradition traces it roots to the social awareness of Woody Guthrie. His guitar, piano, and ukulele reflect inspiration from all over – gospel, rock, blues, jazz, and world music – but Greenway’s central appeal is that it all comes through the singular lens of his own humanity and affinity for the audience. His legendary energy, good humor, and high-spirited give and take ensure that his audiences walk away uplifted. The Boston Globe wrote,“Confessional one moment, rambunctiously disarming the next, few modern folk singers can own a coffeehouse stage as completely as Greenway.”

“Greg Greenway is one of those artists who is so rich a talent that it is difficult to categorize him. He traverses, combines and mixes up musical genres, and manages to open a window on global events that bring us together as citizens of the world. Like other great performers before him, Greenway’s message is that we can all play a part and make a difference in the course of both our private and public lives. But few musicians can do just this with such style, passion and sheer musicality.”

Master musicians CATHY FINK & MARCY MARXER are two-time Grammy winners with a career spanning over 35 years. Their superb harmonies are backed by instrumental virtuosity on the guitar, five-string banjo, ukulele, mandolin, cello-banjo, and more. Their repertoire ranges from classic country to western swing, gypsy jazz to bluegrass, and old-time string band to contemporary folk (including some original gems).

Cathy & Marcy have performed at hundreds of bluegrass and folk festivals and taught at close to 100 music camps worldwide. Happily known as “social music conductors” ready to start a jam session, a community sing, or create a music camp helping others learn to play and sing, the duo’s past students include Kaki King and Rhiannon Giddens.

“As close to flawless folk-bluegrass as it gets.”

They have performed with Pete Seeger, Theodore Bikel, Tom Paxton, Patsy Montana, Riders in the Sky, and a wide range of musical luminaries. They have entertained the Queen of Thailand, been keynote singers for the AFL-CIO, appeared on the “Today Show” and on National Public Radio. The Washington Area Music Association has recognized the duo with over 60 WAMMIE Awards for folk, bluegrass, and children’s music. Cathy & Marcy advocate in Washington for unions, health care for children, and the rights and livelihoods of artists.

The Carroll Café committee and volunteers want to thank all of you who make Carroll Café possible for this season just passed. Without an audience of music lovers we wouldn’t be here, and we hope that you will come out for the next season.

The concerts we presented this past season were Magpie, Phil Wiggins and The Chesapeake Sheiks, Richie and Rosie, Deeper than the Skin, Tret Fure, Trio Sefardi, Ocean Celtic Quartet, and Reunion Road. They were all too wonderful for words, and our deep gratitude and well wishes go out to each and every one of them.

We really do hope to see you all as we continue to bring you the best musicians making the world a better place.
Have a great summer.

As REUNION ROAD, Carol Hausner and Eleanor Ellis mix and match their rich, emotive blend of voice and guitar with songs in the bluegrass and folk roots traditions. The two first met and began singing together in the musical haven of Takoma Park Maryland during the 1980s, in the early days of the Takoma Park Folk Festival. When festival founder Sammie Abbott was mayor he and his wife Ruth hosted many musical parties where members of this vibrant community met and exchanged songs and ideas. The black and white photo of Carol and Eleanor was taken at one of these parties.

Eleanor was raised around New Orleans and, entranced by the local sounds, sang and played guitar in formal and informal settings, weaving together and exploring many melodic roots and genres. As well as solo gigs on Bourbon Street and various uptown venues, she played bluegrass and country with Luke Thompson and the Green Valley Cutups and with Dr. Bill Malone and the Hill Country Ramblers, and performed as a duo with Hazel Schlueter. Upon moving to Maryland and meeting local blues legends like John Jackson and Archie Edwards, she gravitated toward blues, while always keeping in touch with the variety of music and song which brought her there. Eleanor says, “Although I’m more known now for playing blues, I’ve always been drawn to many styles of music and I love to sing these songs with Carol from my folk and bluegrass days.”

Carol’s home was filled with music. Her mother sang and her father was drawn to the folk and traditional music scene in Greenwich Village which he brought home with his guitar, records and the radio. He gave Carol her first guitar when she was seven and taught her how to play and they often played and sang together at home. She began performing while in high school when she joined a bluegrass band started by her history teacher, an accomplished bluegrass musician. In addition to performing, she has been a songwriter throughout. She had the honor of winning first place in the Bluegrass category of the annual Chris Austin Songwriting Contest at Merlefest in 2009 for her original song “Love Gone By,” co-written with Colin McCaffrey. Carol and Eleanor performed the winning song together there.

In this production, the two women trade high and low leads and harmonies to excellent effect on numbers well-crafted to match their distinct voices and lyrical styles. Their repertoire ranges from the bittersweet Flame in My Heart to Kate Wolf’s somber, symbolic journey Across the Great Divide, the beautifully phrased Going to the West, the Carter family’s tale of enduring friendship You’ve Been A Friend to Me and the evocative Hausner and McCaffrey original On My Mind.

This recording brings Eleanor and Carol full circle on their journey from the first Takoma Park days to this reunion in song. Eleanor and Carol say “Our name REUNION ROAD comes from the fact that, even though we don’t live in the same place anymore, we still share friends and memories, and we still continue to sing together every chance we get.”